So, I’m sure most people have heard about it already, but if not the latest Star Citizen news brought a brand new Referral Contest to go with new referral tiers and there’s honestly a lot of controversy due to it.

The first thing that comes up is Sally, who is part of the “Star Kitten” line-up. Most people don’t care for her. I am not most people and I absolutely adore her. 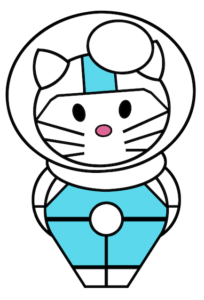 Many people feel she “breaks” the immersion because apparently there can’t be cute designs in Space. Big Benny disagrees, people.

Going back to Sally though, it’s apparently her 15th Birthday and in celebration of her 15th birthday, a special edition UEE Tee and a special Drake Dragonfly are here to celebrate. Isn’t that great? It would be, except it’s tied to the aforementioned referral contest.

This is the shirt: 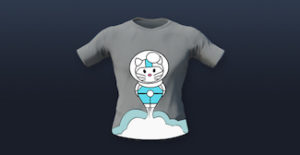 While the Drake Dragonfly, well, not only does it feature a picture of Sally on it, but it’s pink. And this is where the other part of the Sally controversy comes in–people don’t want to see a pink skin. We already have other bright skins. We have cute designs. There is no reason, even lore-wise, that we can’t have a pink skin. Information from the past can change and people need to realize that. It’s not a big deal.

That said, I’m both happy and just… really frustrated and upset. I’ve wanted a pink ship SO badly and while the Dragonfly wasn’t a ship I was particularly interested in, I definitely want this one.

The second thing is the fact that right in the announcement video of the contest, they actually put up three streamer’s referral codes. The first person shown is currently in first and all three shown are in the top 5 (with the second and third people in fifth and fourth respectively).

Personally, I don’t even want the other prizes. Gamescom would be amazing to go to, but it’s not something I’d ever expect to be able to do through a referral contest. Honestly, if I was able to get that many referrals, something tells me I’d be able to afford my own trip to Gamescom. Right now, I’m just hoping for 10 referrals.

The third issue is that old referrals do not count for either of the Star Kitten items–they only count for the two big prizes. Referrals aren’t easy to get and yet the two special items require you to suddenly get new referrals on top of your old ones. I’ll be talking about this more soon, but this is an issue. I only have 4–I couldn’t even get the 10 for the Gold Model set and I’m still one shy for the lovely Referral Fish tank, but I essentially need to somehow get 10 more in about 3 and a half months (the contest ends August 8th) to get the ship I want. And it’s unfortunate that it is very unlikely to happen. I’d love for a miracle to happen, but not everyone has $40 to spend. Heck, I barely do right now.

The final controversy is with some of the new tiers. We finally get more referral rewards and for the most part, I’m happy I don’t care for most of them. In fact, the only one I have any interest in is the one for 1,042 Referrals–access to the Million Mile High Club. I REALLY hope there will be more ways to get this as it’s something I really want, but the only current ways to do so are just too out of reach for me and it makes me sad.

So, the one people are up in arms about is the Star Crossing tier at 2,017 referrals. Anyone who hits that will get a Javelin which is a very pricey ship (People have spent $2,000-$3,000 to get one). Personally, I think it’s silly people are upset about this it’ll be available to get ingame through playing anyway, though, probably a very far off goal. It being a referral reward really shouldn’t be a huge deal.

I want to head back to what I brought up in the third issue to explain what I meant now–Referrals are not easy to get, for most people. If you have a site with a lot of traffic and/or are a streamer or someone on like Youtube or some other platform where you just have a large following, hey, maybe you have a good chance to get a lot of referrals. The thing is, even then, there is one big catch: For a referral to count on Star Citizen, it requires a purchase of at least $40.

Many sites have been doing similar things like requiring someone to have hit a certain point in a story or game for it to count or maybe having subscribed for a month or made one small purchase… The qualifications vary while others may even just be for them to log-in for a week. And of course, there’s still just the “sign up and put in someone’s name/code and it’ll count right away”. The thing is, most people will try a game, but feeling pressured to have to make a purchase or do things can already cause people to shy off/not bother.

The other issue is not all sites or games will have referral systems right off the bat and people will still spread the word, so suddenly there is a referral system and many people will already have invited their friends and family who would have been interested and no longer have any people. Most places will not bother doing any kind of retroactive count, but I have seen an occasional thing where someone can actually mention a user referred them (although, late) either in a pinned post by staff or through some kind of option in settings. Once confirmed by both users, it’s activated. This DOES have a chance to be abused with the latter option, but usually you can just report someone if they keep harassing about it.

The thing is, Referral systems don’t actually need exclusive rewards. So many games and things will have all these perks from various exclusive items you get for having referred many people to large amounts of currency and well, currency is good. People don’t necessarily need all these exclusive things through it, especially when so many people will literally be out of luck. There are even systems that make it so when a user makes a big purchase that uses real money, the user that referred them gets like… 1% of what they spent in a currency they can then use. It’s a really nice reward without any actual list of exclusive milestone tiers at all.

I get wanting more people to your game, but referral systems are just… they don’t really work properly and it’ll always be the same kind of people who manage to get the most use from them. If a game is good, people will spread the word naturally. If anything, Referral systems just encourage more “Ghost Accounts” and there will always be someone who has the money and/or time to make those accounts count.

Finally, the site is being worked on to get all the tables all evened up to make everything look a bit neater. Pardon any issues you made run into–it’ll hopefully be all done within the next couple of days at the latest!

Hi there! This is pretty much where you can find site updates along with my posts on various things relating to Star Citizen. You can check out my main site by clicking here. Now, back to Star Citizen...

Just a wish list of some of the items and ships I’d love to get in the ‘verse.